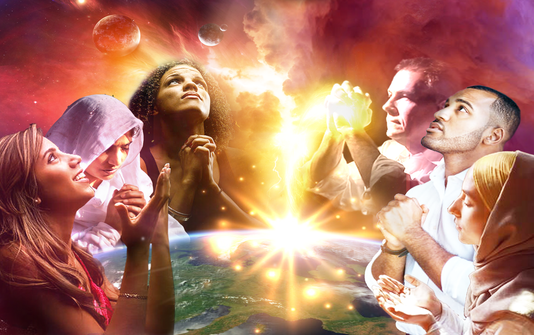 ​​There are many mysteries in prayer that the modern day Christian Church does not know about. Time, Cardinal points, Colours, Days of the Week and Months are very important in prayer strategy.
​
​Every Hour, days, months and time are connected to the revelatory time frame of Heaven, and is dominated by the Angelic Order of the Throne Room - SEE: PRAYING IN THE ANGELIC GATES OF TIME.

​Intercession opens the Gate to God's intervention; but Prayer opens the Gate to God's Hand.
​
THE FOUR BIBLICAL GATE TO ACCESS THE THRONE ROOM IN PETITION
There are "FOUR" Gates of petition to access the Throne Room. Three are for personal petition, "Prayers", "Supplications", "Thanksgiving", (Philippians 4:6) and a fourth is added when it pertains to petition for someone else, "Intercession", (1 Titus 2:1).

Before you enter the Four Steps, you must first be cleared of all allegations, accusations and condemnations that stands against you before God. This is called repentance – Peace with God (Romans 5:1).
As much as the Glory of God brings life it also brings judgement.

PRAYER
Prayer in the Bible was mostly done facing East, as it is a covenant made with Jerusalem. Prayer basically means speaking to God; there are many variations to prayer.
Prayer can denote a direct petition or short, sharp cry of the heart in its distress (Psa 30:2; Php 1:9 ), or prayer can be long as in (1 Kings 8:22-53) or can be in a praise form like that of Hannah (1Sa 2:1-10) and (Jeremiah 31:7), or Petition for benefits either for one's self or can be intercession -petition for others as in that of Jesus, Paul and Solomon (John 17, Eph 3:14-21, 1 Kings 8:22-53).
There are many Gates to prayer, (See PRAYING IN THE ANGELIC GATES OF TIME), but there are Three Main Gates of the Day that seemed to be used in both the New and Old Testament (Psa 55:17; Dan 6:10).
​
When we look at 1 king 8:54, Solomon lifted his hands to the heavens and prayed, yet the scriptures say, “And it was so, that when Solomon had made an end of praying all this prayer and supplication unto the LORD”


SUPPLICATION
Supplication is prayer but having a more pleading tone to it. Prayer in its formal sense is a direct request, but when it takes a turn with pleadings, weeping and bowing, it then becomes supplication. It can be pleading with God for help and assistance for one’s self or on behalf on someone.
This is seen in scriptures where Supplication many times is connected with crying out to God-1 Kings 8:28; 2 Chronicles 6:19; Psalm 28:2; 30:8; 31:22; 142:1; Hebrews 5:7. Consider especially Psalm 142:1; Jeremiah 3:21; 31:9; Hosea 12:4.
You can have prayer without supplication, but you cannot have supplication without prayer; the two is of the same nature.

THANKSGIVING
This takes place in the outer court. Enter into His gates with thanksgiving. This is being grateful for His goodness because the God of your Salvation who has delivered you. That is where we are made whole. The ten lepers were healed, but only the one who returned to give thanksgiving was made whole. Psalms 75:1, “Unto thee, O God, do we give thanks, unto thee do we give thanks: for that thy name is near thy wondrous works declare.” 2 Timothy 3:2 also speaks about unthankfulness as an end time sin.

INTERCESSION
This is petition of behalf of another, which is accompanied by prayers, supplications and thanksgiving. It is a position in the spirit where we stand in the gap, between Jesus and the person who is in need and we plead for them. See ROLE OF AN INTERCESSOR.

We must know that combating Demons is not easy if you possess no knowledge of them. It takes faith, holiness and the anointing in Jesus name to cast out a spirit, but you need an addition - "knowledge" in order to destroy demonic ancestral strongholds.
Because Demons are of different ranks, one must be walking in an anointing that is stronger than this specific demon in order to overpower it.
Though the anointing is powerful over all spirits, yet the anointing will work for Christians according to their level in Christ.
The level of anointing that is moving upon your life will determine the level of power available to you. The deeper you get in God is the stronger the anointing gets; and the more powerful demon you will be able to deal with.
If the power of a demon is stronger than the power that is on you, how can you bind or overpower it? You must have enough power to bind the strong man before you can destroy his territory. ​